The Tax Justice Network – Australia (referred to as TJN) was impressed with quality of analysis in the Callaghan Review, but seriously disappointed in its recommendations to not make any substantive and necessary reforms to existing projects. The Review backed up the analysis put forward by TJN, but completely capitulated to the trumped-up claims of sovereign risk put forward by the industry. The PRRT has been changed at least 9 times already, each time to the benefit of the industry, and no concerns of sovereign risk were raised before. There is plenty of hypocrisy in play here to preserve an incredibly beneficial fiscal regime for the oil and gas industry and one that very clearly deprives Australians of a fair share of revenue.

The Turnbull government has acknowledged for the first time that Australia is failing to secure a fair share of revenue from oil and gas companies, with Treasurer Scott Morrison calling a review into the tax scheme governing offshore projects.

The Australian Parliament is set to investigate the failure of the PRRT as well as the royalty regime for the North West Shelf project, following a campaign by the Tax Justice Network.

Oil and gas tax may raise no extra revenue for decades 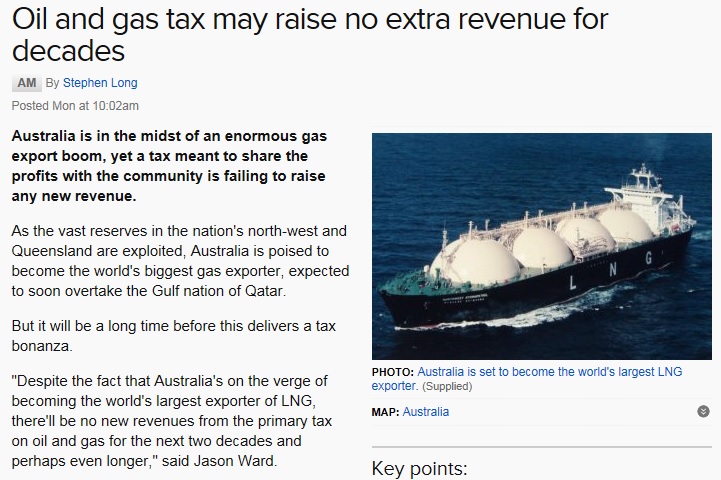 Australia is in the midst of an enormous gas export boom, yet a tax meant to share the profits with the community is failing to raise any new revenue. Tax Justice Network Australia members Mark Zirnsak and Jason Ward explain why the Petroleum Resource Rent Tax is deeply flawed.

The “Big Four” global accounting firms – PwC, Deloitte, KPMG and Ernst & Young – are the masterminds of multinational tax avoidance and the architects of tax schemes which cost governments and their taxpayers an estimated $US1 trillion a year, according to an Australian taxation expert.

For every $1 in aid to developing countries, several dollars slip out through tax dodging. That is money which should be spent building hospitals and schools.
Tax revenue enables governments to provide essential services such as health and education as well as infrastructure such as roads and transport.  Tax evasion deprives everyday people of these vital services.  In developing countries this can mean the difference between life and death.

Illegal, trade-related tax evasion alone will be responsible for some 5.6 million deaths of young children in the developing world between 2000 and 2015.  That is almost 1,000 a day.

Join the Tax Justice Network to call on the Australian Government for greater transparency on corporate tax.